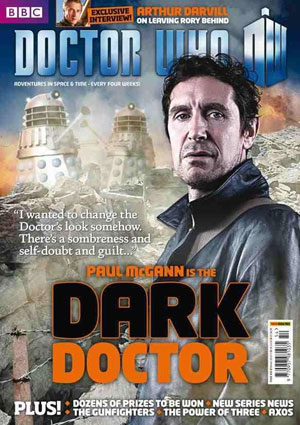 Doctor Who Magazine 454 is back on the shelves at Annie’s!! And you might want to come on down and get your copy the moment you have finished this blog (or maybe just read this blog later and stop on by) because they sold off the shelf the moment they arrived the first time around!! But we just replendished the shelf with fresh copies, so get ’em while they’re hot!!

Why all the excitement? Eighth Doctor Paul McGann is front and center on the cover and in the feature article with the brand new look he first unveiled at the Armageddon Pop Culture Expo in Auckland , New Zealand back in 2010. Equipped with a redesigned wooden Steampunk Sonic Screwdriver.

Now Big Finish is officially introducing the Eighth Doctor’s new look to the ongoing series. In the Dark Eyes story arc (released in a four CD Box Set) we have a darker and somber Eighth Doctor who has lost his friends in the previous series to the Daleks. Now he finds himself with a brand new companion Molly O’ Sullivan and on a mission from the Time Lords.

And once again he must face his old foes: The Daleks.

In the article Paul discusses how he went about talking with Big Finish about changing his Doctor’s look as well taking part in several “in character” shots for the first time in 16 years.

Also in this issue some tid-bits on some of the new scenes Doctor Who is producing for this year’s Children in Need televised charity that links up with the upcoming Christmas Special which has offically been titled The Snowman. Also departing companion Arthur Darvill discusses leaving the series after three years on the show.

In Countdown to 50 we look at Series Twenty-Four which brought us a brand new Doctor in the guise of Sylvester McCoy. A series that started out rocky, light-weight and not to mention at times very silly began to find it’s bearings by the end with the departure of Bonnie Langfords less-than-fan favorite Mel and the introduction of Sophie Aldred as the street-wise, bat-wielding and Nitro 9 fancier Ace. It also saw by the last episode of Series Twenty-Four the character of Sylvester McCoy’s Seventh Doctor being to move away from the sillier portrayal as the actor was trying to fndevelop into the darker Machavillian mind he would be associated with until the end of his run in 1989.

The Watchers Guide looks at the Axons. The Time Team focus on Captain Jack and Torchwood: Series One.  The Doctor and the TARDIS team’s comic book style adventures continue in part four of The Broken Man.In A Battle of Wits, Johnny and Tobey debate which is more thrilling. When Doctor Who Monsters come from Earth or invade from outer space? And Fact or Fiction looks at the William Hartnell era episode The Gunfighters.

There’s also a chance for readers to win a copy of the brand new Eighth Doctor Box Set Dark Eyes in the issue.

So don’t miss out!! Come on down to Annie’s and get your copy before they dematerialize from the shelves… again!!