Up first is #2.3 War Against The Laan. ‘Just a taste of Armageddon, Romana. It’s what happens when acquisitive minds are left unencumbered by conscience.’

The Doctor, Romana and newly elected President Sheridan Moorkurk take on the all-consuming powers of business tycoon Cuthbert and his vast Conglomerate. But the situation goes beyond a struggle for political power. Cuthbert is intent on revenge on creatures he feels have attacked his interests. But when his revenge looks like leading to inter-species war, the Doctor knows the stakes couldn’t be higher.

The Laan are on the move. Is it too late to prevent the destruction of all life on Earth?

Next up is #2.4 The Justice of Jalxar. They call him The Pugilist. 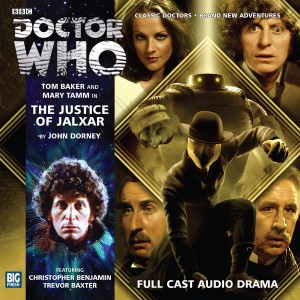 It is the dawn of a new century and a vigilante is on the loose. The scourge of the criminal underclass.

The saviour of the virtuous and the protector of the weak. The police are baffled, the public enamoured…  but Professor George Litefoot and Henry Gordon Jago are on the case. Or at least they will be when they’ve finished their beer.

What is the source of The Pugilist’s spectacular supernatural powers? Is he alone in his noble quest? And what

is his connection to the spate of corpses discovered around London?

As they descend further into a nefarious netherworld, the infernal investigators may be out of their depth. They’re going to need help if they’re to get out of this alive. The help of an old friend and his new assistant. The help… of the Doctor and Romana.

Come on down to Annie’s Book Stop of Worcester during normal business hours and pick up either one of these great Fourth Doctor titles today!!