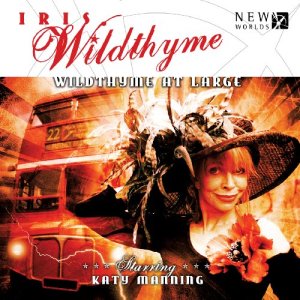 Come down to Annie’s Book Stop of Worcester Massachusetts and discover the audio escapades and exploits of “Trans-Temporal Adventuress” Iris Wildthyme for yourself.

A character originally created by author Paul Magrs for the DOCTOR WHO range of BBC Books, Iris has long since made herself comfortable in the  DOCTOR WHO audio range from Big Finish as well.  The IRIS WILDTHYME audios star Katy Manning, who had originally played the Third Doctor’s companion Jo Grant in the television series.

Iris travels the universe in a TARDIS disguised as a red double-decker bus which is remarkably smaller on the inside than it is on the outside. Her modus operandi involves getting into scrapes and enjoying a good stiff drink wherever she goes.

Iris’s audio adventures began in the DOCTOR WHO story “Excelis: Dawn”, starring Peter Davison as the Fifth Doctor, and continued in “The Wormery” alongside Colin Baker’s Sixth Doctor. And it wasn’t long before she embarked on her own series of adventures… first alongside a stalwart companion named Tom, and then alongside a sentient stuffed panda named…. Panda.

The casual listener needn’t know the history of Iris or of DOCTOR WHO to enjoy the series, and it’s easy to jump into the audios at any point. However, her adventures began with “Iris At Large” and continued in “The Devil and Ms. Wildethyme”. Both Series Two and Series Three are available in boxed set form only, as opposed to the singles of Series One.

So come on down to Annie’s Book Stop of Worcester, located at 65 James Street, or visit us online at www.anniesbooksworcester.com, and get yourself wrapped up in the world of Iris Wildthyme and Panda. You won’t be disappointed, Chuck!!