Cassandra Clare’s thrilling series The Mortal Instruments hits theaters today, and if you find yourself pulled in by Clary Fray’s story and need to know more, be sure to come by Annie’s Book Stop of Worcester and grab yourself a copy of book two, City of Ashes.

Tessa Gray’s story may be set in the same universe as Clary’s, but her story is all her own. She crosses an ocean to look for her brother in England, only to be kidnapped into London’s Downworld by the Pandemonium Club’s Dark Sisters. The ordeal leads Tessa to learn that she has the power to transform, and The Magister of the club wants her power for his own. While on the run Tessa falls into refuge with the Shadowhunters, and soon finds herself torn between friends – and sides – as she discovers a plot that threatens to take down the Shadowhunters. Tessa soon realizes that she will have to choose between saving her brother, and  helping to save the world.

We have something for our younger readers, too! Falcon in the Glass, by Susan Fletcher, is perfect for ages 10 – 14. (Or anyone  young at heart!) 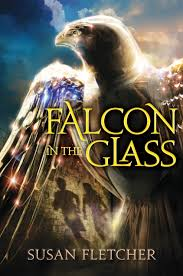 Young Renzo dreamed his whole life of becoming the bets glassmaker in Venice, but such dreams are crushed when his father was murdered and his mother and sister were left to rely on Renzo to survive. He finds work as a drudge in the glassworks, but it’s all he’ll ever be unless he can prove his skills in less than two months, and with no help permitted. During his practices one night he discovers a girl hiding in the glassworks, an outcast child of the bird children with a falcon who seems to listen to her. He offers her food and shelter in exchange for her help and silence, but the plan runs awry when Renzo discovers the girl is not alone! Now Renzo is stuck hiding a group of children accused of witchcraft, all the while struggling to learn his trade in time. He soon must choose between loyalty to his family or to a group of strangers, and Renzo finds himself turning to the glass itself for answers. Will it yield its secrets to him in time?

We’re always getting lots of great children’s books in for the youngest of the young readers as well! So be sure to come check out our early reader, and picture book selection.