Our Teens/Young Adult section has not been forgotten either! Among the selection, we’ve now got a great collection of manga titles, including BLEACH and RUROUNI KENSHIN. They tend to go fast, so get them while you can!

Here are a few of the books we’ve recently gotten in, fresh from the publishers.

Hilary Weisman Graham invites you on a road trip in Reunited, a story about one concert, two thousand miles, and three (ex!) best friends. Alice, Summer, and Tiernan have been an inseparable trio of friends since they were young, and self-proclaimed biggest fans of the band Level3 for just as long. But when High School started, Level3 split up — and so did the three girls. Now with graduation just around the corner Level3 announces a reunion show, and Alice buys three tickets on a whim, inviting her three former friends along for a road trip from Boston to Austin. Will their friendship get an encore? 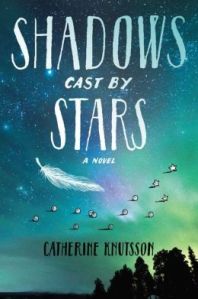 Shadows Cast by Stars is Catherine Knutsson’s debut novel. Hundreds of years into the future, the world has been ravaged by a terrible plague and blood is now the most valuable commodity on the planet – blood, that is, from the aboriginal peoples, with precious antibodies against the disease. Cassandra may be safe from the illness, but that puts her in danger as Government forces hunt her entire family down to harvest their blood. Their only hope is to flee to a mysterious island protected by a band of guerilla warriors…and by an energy barrier that keeps outsiders out, and the spirit world in. The village healer has taken Cassandra under her wing, but the creatures within the spirit world are angry — and they have chosen Cassandra as their voice, and their instrument.

The autumn will bring us even more exciting releases… stay tuned to our blog, or stop by our store at 65 James Street!

—Patty and the staff of ABSW