Annie’s Book Stop of Worcester is happy to shine our spotlight on Kristy Shen and Bryce Leung, the authoring team who created LITTLE MISS EVIL, to our Friday blog! Kristy and Bryce will be joining us on Saturday, July 25 for our Worcester Needs Diverse Books event from 2:00-5:00 PM. Both authors have been part of the growing #WeNeedDiverseBooks movement that started in 2014 at Book Expo America, where many authors noted a distinct lack of diversity in the panels of the largest book trade show in North America. Since then, they’ve had their awesome super-villain story published and helped grow the grassroots movement across the globe.

Thank you so much for joining us, Kristy and Bryce! For readers unfamiliar with your work, how would you describe what you write? What can readers expect from LITTLE MISS EVIL?

I would say our writing is kind of like a popcorn-munching action movie, in book form. It’s got super-villains, super-gadgets, helicopters, and more explosions than you can shake an exploding stick at. Basically, if you like flamethrowers, you’re gonna have a good time reading LITTLE MISS EVIL.

What was the inspiration for LITTLE MISS EVIL? What were the steps you took to bring it from initial inspiration to the finished book?

Well, we’ve always found the bad guys in most movies to be the most interesting characters. We were the ones rooting for the Joker to win. Because most of the time, the heroes are just so incredibly boring. So that’s where our inspiration came from, the desire to write from the villain’s perspective. And then we were watching an old rerun of Austin Powers, and we thought, hey what if the protagonist was a little girl, who’s father was this over-the-top James Bond/Dr. Evil-style super-villain? And from there the idea just came together really quickly.

By far, the protagonist Fiona Ng was the character we most loved writing. She’s this vulnerable kid, who’s desperate for some semblance of normalcy despite her infamous Dad, and when her Dad gets kidnapped, she’s suddenly thrust into this position of power and responsibility that no 13-year-old should ever be put in. It was just so much fun putting her in these crazy situations and watching her claw her way back out.

What draws you to the particular genre or style that you write? What do you think draws 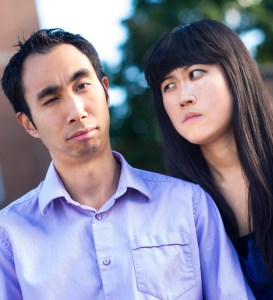 readers to these kinds of books?

Middle Grade has this unique ability to simultaneously put our characters in these over-the-top situations, while at the same time not take itself too seriously. Throughout the entire process we’re constantly making nudge-nudge-wink-wink references to the James Bond franchise, Austin Powers, action movies in general. It’s a lot of fun.

Your job as a writer is to entertain your reader. Everything else is secondary. Once we realized that, good things started happening.

One thought on “Author Spotlight: Kristy Shen and Bryce Leung”