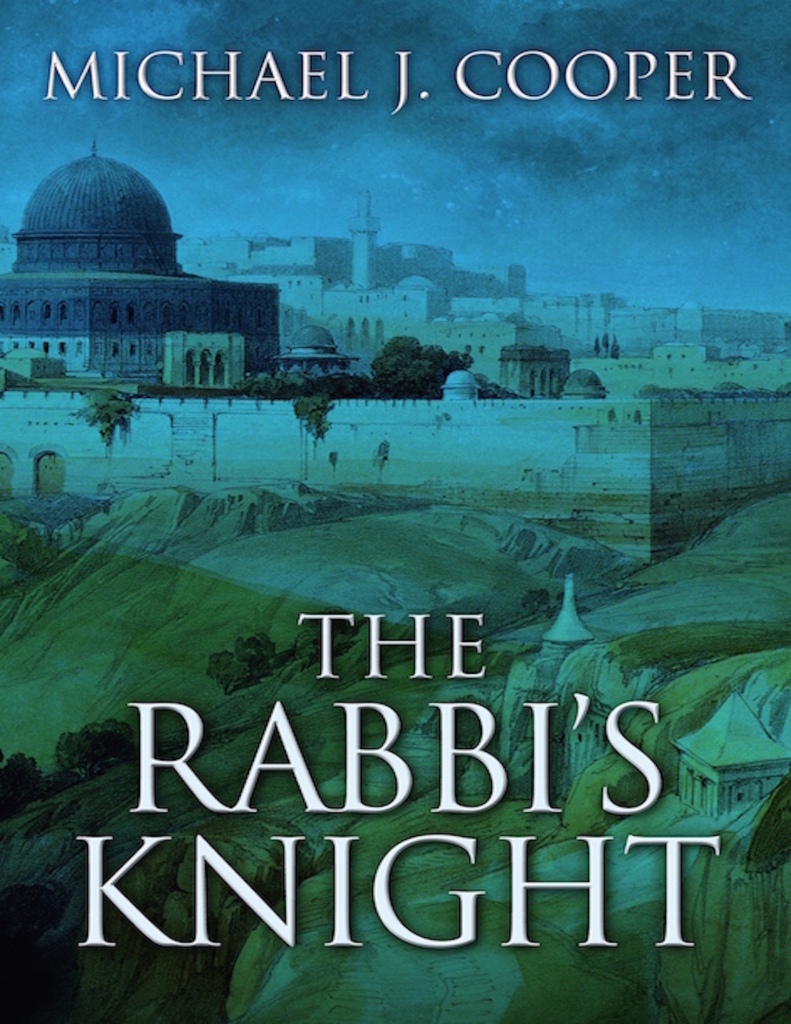 Annie’s Book Stop of Worcester is happy to host author Michael J. Cooper to our store on Saturday October 3rd from 7:00 – 9:00 PM to talk about his latest novel, The Rabbi’s Knight. Get to know Michael and his work that inspired his novels a little early with our Spotlight Interview!

Thank you so much for chatting with us a little early! Would you please tell us a little more about yourself and your writing?

A native of Northern California, I emigrated to Israel in 1966 and lived in Jerusalem during the last year the city was divided between Israel and Jordan. Living in Israel for the next ten years, I worked at hospitals and a few kibbutzim, taught English and music at the Western Jerusalem YMCA, studied at Hebrew University in Jerusalem, and graduated from Tel Aviv University Medical School. After returning to Northern California, I specialized and then worked in the field of pediatric cardiology, and published peer-review articles in medical journals.

About fifteen years ago, I turned from medical writing to historical fiction and I was awarded the Indie Publishing Contest grand prize in 2011, which led to the publishing of my first novel, Foxes in the Vineyard, historical fiction set in Jerusalem of 1948. My second novel, The Rabbi’s Knight, was a finalist for the 2014 Chaucer Award for Historical Fiction. Now in semiretirement, I’m working on my third novel, Sins of the Fathers, set in Ottoman Palestine during WWI, and I continue to travel to Israel twice a year for volunteer medical missions to the West Bank, serving children who lack adequate access to care.

All my historical fiction is informed and animated by an extensive, first-hand knowledge of the setting having lived and worked in Israel for over a decade. Among the many archaeological sites throughout the region, vestiges of the Crusades abound. These images along with those of the unchanging Mediterranean, the Old City of Jerusalem, the Galilee, the mountains, and the deserts—these images are always with me. To paraphrase the medieval Hebrew poet Yehuda Halevi;

“Though I am in the uttermost west, my heart is in the east.”

My writing is also informed by the tragic dynamic of two people who claim the same land. While well-aware of past and present sources of contention, I’ve often speculated about other, hidden sources of discord, and possible well-springs of peace. Indeed, I yearn for a time when Jerusalem will no longer be a bone of contention at the center of a seemingly unending conflict, rather a Jerusalem that will reflect its name—a city of wholeness, a city of peace. These hopes are at the heart of The Rabbi’s Knight. To paraphrase the 13th century poet, Rumi;

“Be a full bucket pulled up the dark way of a well,

then lifted out into light.”

For readers unfamiliar with your work, how would you describe what you

write? What can readers expect from your work?

My first novel, Foxes in the Vineyard, is historical fiction set in 1948 Jerusalem as the British Mandate is ending and the conflict, commonly known as Israel’s War of Independence, is about to begin. It poses the central question, “What if covert elements of Nazi Germany, secretly deployed to Palestine before the end of WWII, emerged in 1948, using terror to sow discord—driving Jews and Arabs to war, driving the British from Palestine, and seizing Jerusalem as the new capital of the Third Reich?” While this is clearly a work of historical fiction, it is also strongly allegorical with rich elements of metaphor, late love, action-adventure and even hidden history and fantasy mixed in. At the center of the story is the Temple Mount, which the Third Reich covets. This embodies the idea of an “Upper Jerusalem” – where we meet our best selves and our better Angels. This is the metaphorical “vineyard” that the “foxes” wish to possess. Defying them are the father and son team of Clive and Evan Sinclair who stand in the breech, risking everything to stop them.

The Rabbi’s Knight is in many respects a prequel to Foxes in the Vineyard, set in the Holy Land at the end of the 13th century, the twilight of the Crusades. We meet the Knight Templar, Jonathan St. Clair who apprentices himself to the eminent Rabbi Samuel, the last Gaon of Baghdad, to learn how the inmost secrets of Kabbalah might unlock the secrets of Jerusalem’s Temple Mount. Thus the Temple Mount and the idea of the “Upper Jerusalem” are also at the center of this story. And since Jonathan St. Clair is the ancestor of the Sinclairs, we have the two books linked by both the Temple Mount and a noble bloodline; seven generations before Clive and Evan Sinclair battled the Foxes in the Vineyard, Jonathan St. Clair became the Rabbi’s Knight.

The third novel in this trilogy is currently being written, and though all three books can stand alone, Sins of the Fathers is set in Ottoman Palestine during WWI, and will again be linked with the other books through the Sinclair bloodline and the Temple Mount.

What kind of research went into writing this book? What is your favorite research story? What cool facts and findings didn’t make it into the book, but you loved discovering?

Researching the historical underpinnings of The Rabbi’s Knight was a thrilling labor of love. Beginning before there was a World Wide Web or Google, I relied on a variety of histories concerning the Crusades, written from both Christian and Moslem perspectives. Focusing on the final siege and battle for Acre, the last Crusader stronghold in 1291, I worked backwards by about a year to construct a storyline that would lead to the fall of Acre and the end of the Latin Kingdom of Jerusalem, a very significant historical turning point.

While Jonathan St. Clair and his love interest are among the few fictional characters of the book, I began to experience a host of amazing and compelling actual, non-fictional characters who seemed to leap from the pages of history and, seemingly by their own volition, claimed a place in the story. Time after time. I was shocked and delighted at the rich texture of the historical figures who presented themselves and compelled me to weave their lives into the tapestry of the book; Isaac of Acre – a brilliant 19-year-old scholar, David Maimuni – grandson of the great Maimonides, Abraham Abulafiya – the preeminent and eccentric Kabbalist, Solomon Petit – the bitter French rabbi whose violent hatred of Maimonides led to his excommunication, and the eminent and learned Rabbi Samuel, who issued the writ of Petit’s excommunication.

Finding Rabbi Samuel in the pages of the Encyclopedia Judaica was perhaps the most thrilling discovery of them all—a terse entry saying little more than Rabbi Samuel ben Daniel Hakohen was the last head of the Baghdad Academy before it closed due to the gradual destruction of Jewish life in Babylon under the Mongols. The entry also stated that little was known of Rabbi Samuel apart from two letters written in 1288 dealing with the excommunication of Rabbi Solomon Petit. After that, Rabbi Samuel, the last Gaon of Baghdad. disappeared from history—that is until he appears in the pages of The Rabbi’s Knight. How delighted and honored I felt to give Rabbi Samuel further voice, vitality and a heroic, if fictional, history.

But, of all the Jewish, Moslem and Christian historical and fictional characters, perhaps the most surprising was 19-year-old William Wallace of Scotland. I took a measure of artistic license in agreeing to William’s demand that I place him at a scriptorium in France in the year 1290—the right time and not an unlikely place for the landless son of a Scottish Lord. From there, William suggested that I place him in La Rochelle on the French Atlantic Coast where he meets Knights Templar bound for the Holy Land. He also meets a group of Jews from York, exiled that year by King Edward I along with all English Jewry. William finds a way to visit the Holy Land by arranging passage for himself and the exiled Jews of York with the Templars. Once there, William will further conspire with Isaac of Acre to reach Jerusalem. I am indebted to William Wallace for constructing this arc of the story.

What was the inspiration for The Rabbi’s Knight? What were the steps you took to bring it from initial inspiration to the finished book?

The inspiration for writing The Rabbi’s Knight, as stand alone or as prequel to Foxes in the Vineyard arises from having lived in Israel during my “coming of age” years while coming to grips with the tides of history that have swept through this special part of the world, a land at the crossroads of empire. Having grown up in Zionist youth groups with a clear and compelling narrative of the ingathering of Jewish exiles into the Land of Israel, upon arriving in Israel at the age of eighteen, I was fascinated with the gradually unfolding awareness of the other perspective; specifically, that of the region’s indigenous people—the narrative of Moslems, Christians, and Jews of the Levant. While well aware of the potential for, and reality of, conflict between the two competing stories, I experience and observed many examples of mutual respect and coexistence during my years in Israel. I also observed and experienced examples of mutual suspicion and hatred. Well before I began writing historical fiction, I found solace in the examples of coexistence, and the potential and promise of peace. I found that my feelings resonated with an early and abiding branch of Zionism known as Cultural Zionism, a Jewish nationalism that is infused with the prophetic voices of Judaism and recognizes and respects another people’s nationalism and strives to reconcile the two. Despite a century filled with conflict, punctuated by wars and terrible act of violence, many Israelis refuse to relinquish the hope that there will be a moment when Israelis and Palestinians will acknowledge a common truth they can agree upon, each with the other. And with truth, there will be room for reconciliation, and finally, peace. This moment, this peace is the goal that inspires my writing.

Both my novels are available for purchase or ordering at ABSW. My website, michaeljcooper.net which currently reflects only my first book, Foxes in the Vineyard, will soon be updated to include The Rabbi’s Knight along with links to other writings, appearances, my blog and contact information.

As noted above, my current website, michaeljcooper.net will soon be updated to include all current and increasingly awesome information.

Thank you so much for the interview, Michael! We look forward to hosting you and your books on Saturday, October 3, from 7:00 – 9:00 PM at our 65 James Street “bigger on the inside” bookstore!