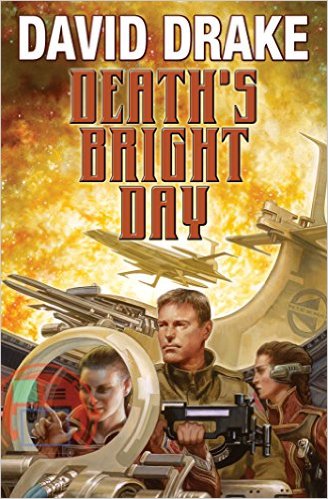 Annie’s Book Stop of Worcester on 65 James Street is happy to welcome Baen science fiction author, David Drake to our spotlight for the first time! Drake one of the foremost writers of realistic action SF and fantasy. His bestselling Hammer’s Slammers series is credited with creating the genre of modern Military SF. He often wishes he had a less interesting background. His newest book, Death’s Bright Day, will be available THIS TUESDAY!

Welcome to our blog! To start off with, for readers less familiar with you, can you please tell us briefly a little about yourself and your writing?

I was a history and Latin major at Iowa and started law school at Duke. I’d sold a few stories as a hobby, when I was drafted out of the middle of law school and sent to Viet Nam. (Thank you, Robert S McNamara.)

I came back, finished law school and practiced for 8 years, but I began writing much more seriously on my return as a way to get my head straight. (Relatively straight.) In 1980 I quit lawyering and got a part time job driving a city bus.

I had more time to write, but I quit because lawyering was eating me alive rather than to build a writing career. To my delight and amazement the career really took off and I quit driving the bus after a year.

What is your favorite part of being a writer? Of the whole writing and publishing process? What do you think has been your greatest lesson in the journey thus far?

The best thing for me about writing is that I’m working for myself, by myself. I was never a very social person, and I came back from Nam with PTSD which brought lots of problems for working with other people.

Now, you’re never completely alone as a writer. I’m married and have a reasonable social life. I interact with editors and publishers and my agent.

That’s fine. But at the end of the day, the words on the page are my works when they leave my house; and because I make it a priority, they don’t get a lot of editorial meddling either. There are editors who want to leave their mark. That’s fine for some people, but it’s not good for me because I write to keep myself between the ditches rather than for money or fame.

The words matter to me because they were the only thing I could really control after I got back to the World (returned from SE Asia). As a general rule, I’m very easy to deal with and don’t make waves—but don’t screw with my prose.

Don’t be full of yourself.

Writing doesn’t make you special; it’s just what you do. If you write well, great. But my dad was a very fine craftsman, an electrician. I’m not better than he was, though I hope I’m as good at what I do as he was at what he did.

I translate Latin for fun and put it up on my website. I guess that’s a hobby. And believe me, I use the techniques I learn from Classical craftsmen, particularly Ovid, in my own work.

That’s an interesting question. I work outdoors when the weather permits, and I have a pretty broad range of acceptable weather. Right now it’s 40 degrees and dropping, and there was a brief snow shower earlier in the afternoon. But I’m writing this in February and the book comes out in June.

I have decks and porches on three sides of the house (which I built to write in), plus a screened porch and a sun porch for more extreme conditions. I’ve been doing it this way for as long as I’ve been writing–long before I was a serious writer. It just works for me.

I don’t actually need anything, but for druthers, I prefer to have classical music and tea (hot or iced, depending on the weather). I also like to have the house to myself, though it’s a big house and there’s certainly room for my wife and I now that she’s fully metabolized the fact that this is my workplace. (That took years, but we’ve had years.)

I’ve never been to Worcester, so I wouldn’t know about Annie’s had y’all not contacted me. So absolutely visit [ABSW] if you’re in the neighborhood.

Any bookstore that carries SF and fantasy will probably have something of mine. If you happen to be in San Francisco, go to Borderlands, which my friend Alan Beatts owns.

But I do have a website, david-drake.com, with lots of stuff on it (including my Latin translations!). And I do a newsletter every two months or so. I mention whatever’s coming out soon and what I’m working on. Usually I close with musings of some sort. I guess you could think of it as a very occasional blog.

Incidentally, it’s not a marketing site. If you want to buy a book of mine, go to a place that sells them–like [ABSW].

Thank you so much for taking the time for this interview, David. A lot of our customers and friends are fans, so this is a great gift to them! David’s newest book, Death’s Bright Day, will be available THIS TUESDAY—and we’ll have copies. So come grab it!