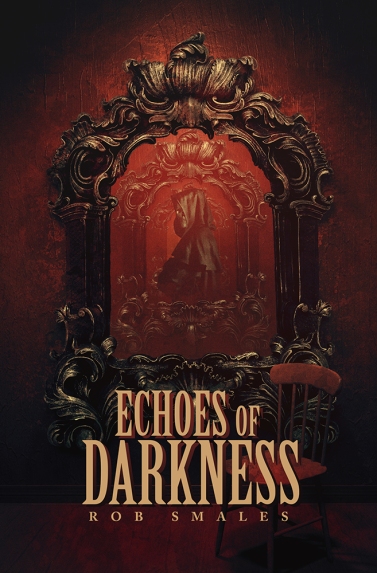 Annie’s Book Stop of Worcester is happy to shine our spotlight on author Rob Smales, who will be the featured reader of Worcester Storytellers this evening, Friday, October 28 at our 65 James Street bookstore that’s “bigger on the inside.” The open mic readings start at 7:00 PM, and Rob will finish out the night with his spooky, creepy, and funny stories!

Rob has been telling stories his whole life, but didn’t start writing them down until he was in his forties. He’s now forty-*cough-cough*, and in the past six years has managed to get more than two dozen short stories published in various anthologies and periodicals, mainly in the horror genre. He’s won a Preditors and Editors Readers’ Choice award, a Superior Achievement in Dark Fiction award from Firbolg Publishing’s Gothic Library, and has been nominated for a Pushcart Prize. His recent story collection, Echoes of Darkness from Books and Boos Press, has been well received, including a five-star review from Cemetery Dance―and he is quite proud to be the featured author for Worcester Storytellers in this month of October. Happy Halloween!

Thank you for joining us, Rob! For readers unfamiliar with your work, how would you describe what you write?

Wait, what does that mean?

Basically, I write suspenseful horror that’s all about the characters. There can be monsters, evil people, or even some kind of act of God (and we all know what a sense of humor he has), but what I want to know is how the people in my stories deal with it. And each other. That’s where my interest lies—not in the gory consequences of failure, but how they go about avoiding those consequences. You won’t usually find a lot of blood in my stories (unless it fits the plot; I mean, come on, this is horror), and definitely no gore just for the sake of “Look! Gore!” but you may find some people you like, and possibly even a laugh or two. And those people you like, well, they might even survive!

In Echoes of Darkness I have thirteen stories, all about different people and the things they have to deal with—and they have to deal with a lot: werewolves, zombies, serial killers, acts of God, and even a little madness here and there, just to name a few. But no matter what they’re in the middle of, it’s all about the people, because let’s face it: people are fun, people are different, and, depending on the story, people are tasty . . .

As a reader I’m eclectic—my friends recall me reading a lot of fantasy and sci-fi growing up—but when I sit down to write, the creepy often comes out. It’s not all I’ve written; I’m actually an LDS-published author and have written sci-fi for my son when he was younger, but for some reason the scary/dark stuff is what comes easiest to me. It’s all fun (hard, but fun), though, and as long as it’s fun, I’ll keep on doing it.

Regarding why I think people buy these types of books, read these types of stories, well . . . look, the world is a scary place. Always has been, always will be. The day-to-day things we fear may change with the times, or as we get older, but the fear is still there, and it’s never going to go away. But in a book or story you get to experience someone else’s fear, like riding an emotional amusement park ride. That makes it fun. It’s fear and tension without any real consequences to you as a person, and even if it starts to become too much for you, you can always put it down; that puts you in control. So you read your story, take your scary amusement park ride, and have fun with your fear for a while. And then, when it’s over, you close the book, put it away, and come back to the world where your real fears live – things like wars, and politics, and our kids growing up and learning to drive. Holy crap, next year my son’s learning to drive!

Stopping work on a story or project and putting it out there in the public eye. My self-confidence was the wrong size, you see, and we tried to exchange it but they were out of stock, and now it’s on back order. Been waiting for it for years. In the meantime I have difficulty saying a particular story is done. I’m much more likely to go over a story five, or seven, or nine times (and so on, and so on), even when I have it the way I want it as a story, than to just shoot something out there for people to see raw. I want very much for everything to be perfect, even though, cerebrally, I know it won’t be. I’m terrified of putting out something that sucks or that someone can just poke holes in as a story.

The only way to overcome that is to eventually say enough is enough and just put it out there. It’s gotten easier to do over the years, but I still have to overcome it every time. I’ve found an editing partner whom I trust, and respect as a writer, and that’s helped tremendously, but there are still squirrels wrestling in my stomach every time I have to click SEND on a submission or step up in front of a crowd to read.

Revise, revise, revise. I’m not even kidding. Always use an editor—professionals can be a little costly, but they’re worth it, trust me—but even before you get to that stage in a project, reread and revise your work. As a reader I see things out there that are obviously first draft, and I have to put them down. The story itself may honestly be terrific, but I can’t enjoy it while fighting my way through the typos. As an editor (S & L Editing, look us up on the web) I also see things come across my desk that are a lot more rough than they need to be. Will I fix them, help the writer polish the story, and make it shine? You bet I will. But the more I have to work on something, the more I charge. Give your story the care it deserves; it’ll save you money, and your story, however long, will be told clearly and just the way you want it. That’s a win-win in anyone’s book.

Facebook. If you’re a beginning writer looking for a community of writers, log into Facebook and do a search for whatever genre interests you. Every genre has a page—usually more than one—dedicated to writers of that genre. If you have questions, they have answers. If you don’t even know what to ask about, then just lurk and watch the conversations. Chime in when you want and ask questions when you have them. A Facebook genre page is like one-stop shopping for advice and information on writers’ groups (national, regional, and local), editors and editing, publishers and publishing, and even writing itself. If there’s one thing you can count on writers wanting to talk about, it’s writing.

In the near future? Let’s see: I have a story titled “The Christmas Spirit” appearing in a 3-novella anthology debuting in early December. The book, titled Triplicity: the Terror Project, Volume 1, is coming out of Books and Boos Press, and also features the work of Stacey Longo and Tony Tremblay. In 2017 I’ll have a pair of short stories in Insanity Tales III, an anthology from The Storyside Press. After that . . . well, after that we’ll see. There’s always something in the works.

You can find out more about me and my work at my website, RobSmales.com, or you can look me up at TheStoryside.com, the website for the writers collaborative I’ve been working with for a while. If you want to keep track of me from day to day, though, and be alerted to work I have coming out or events I’m attending throughout New England, your best bet is to look me up on Facebook, at https://www.facebook.com/Robert.T.Smales/. And no, I won’t find that creepy at all.

Thank you, again, Rob! And we look forward to having you read at our store tonight, Friday, October 28, with the Worcester Storytellers from 7:00 – 8:30 PM!