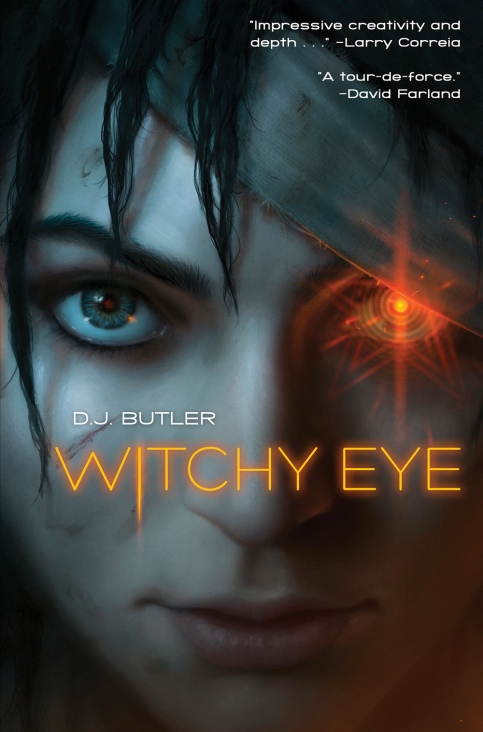 Annie’s Book Stop of Worcester is happy to shine our spotlight on author David John (D.J.) Butler, who is celebrating the release of Witchy Eye. Butler will be at the store on Wednesday, May 31 from 6:00 – 8:00 PM, singing, reading, and talking about his writing.

Thank you so much for being on our blog, Dave! Can you please tell us briefly a little about yourself and your writing? How would you like us to introduce you?

Hi! I decided I wanted to be an epic fantasy writer when I was eight years old and I read The Lord of the Rings for the first time. Life’s funny, though, and you take detours; my detours included law school and thirteen years of practicing law in London, New York, and Idaho, and then corporate consulting and training.

In 2010 I started writing novels seriously. I’ve published steampunk (City of the Saints), urban fantasy (Rock Band Fights Evil), dystopian science fiction (Crecheling), and fantasy for young readers (The Kidnap Plot). This year, Baen helped me realize my lifelong ambition by publishing Witchy Eye, my epic fantasy debut. Witchy Eye is the story of Sarah, a clever, brave, loyal, xenophobic, and somewhat mean Appalachee witch who learns she is the secret daughter of the dead empress Mad Hannah Penn, and that the living emperor, Thomas Penn, has learned of her existence and wants her dead. It’s epic fantasy…set in an alternate 1815 America!

I live in Utah (trivia: my house is Stephen R. Covey’s first home, and my office is where he did his work on The 7 Habits of Highly Effective People) with my wife Emily, whose literary debut, Freya and Zoos, should come from Crown Books for Young Readers in 2018. We have three delightful children, who are readers, writers, musicians, speakers of foreign tongues, and players of games.

For readers unfamiliar with your work, how would you describe what you write?  What can readers expect from Witchy Eye?

I write fantasy adventure stories that are deeply intertwined with the cultures, languages, and history of the real world. Witchy Eye is an excellent example of this: it’s a classic epic fantasy novel, but set in an 1815 America. The America of Witchy Eye, though, is not a young republic, but an empire, with an elective emperor, a race of semi-human elves (the Firstborn, thought to be children of Adam but not of Eve) inhabiting seven moundbuilder kingdoms in the Ohio Valley), a secret society established by Bishop Benjamin Franklin operating behind the scenes, and an ancient god at the center of the continent who has just transformed from his civilizing peaceful manifestation, Peter Plowshare, into his vengeful and violent self, Simon Sword.

I read lots of non-fiction. Crazy lots. Some of the books I’ve read that have fed into the stew that is Witchy Eye include David Hackett Fisher’s Albion’s Seed, Henri Frankfort’s Kingship and the Gods, Robert Graves’s The White Goddess, Frances Barrett’s The Magus, and Grimm’s fairy tales…for a start.

I love the serendipities that come in research, and that can be worked into the book (and sequels); for instance, in Ojibwe, the word for a dollar is waabik, which means iron. Since in the books, the Ojibwe (who live in the Great Lakes region of the US and Canada) border and know the Firstborn, who are allergic to silver and use iron coins, I was able to create a false, fantasy-world etymology for the real-world Ojibwe word: the Ojibwe call money “waabik” because their initial encounter with coinage comes from the Ohio Valley Firstborn, who use iron. Another example of something I love about America and that makes it into the sequel (but not into book one) is the widespread and common story of the discovery of the mummies of red-haired giants, all over America. In the Witchy Eye setting, these giants still live reclusively at the edges of the Empire; they make a small appearance in the sequel, Witchy Winter, and I suspect we’ll see more of them in future books.

What was the inspiration for Witchy Eye? What were the steps you took to bring it from initial inspiration to the finished book?

Although lots of history and big ideas went into Witchy Eye, one of the very first pieces of inspiration was my daughter Camille, who is now 12. Her eyes dilate at different rates (a fact which turns out to be harmless, but which was terrifying when we first noticed it), and as a younger child I called her my Witchy Eye. And Witchy Eye is in many ways about a young girl discovering the legacy – heroism, beliefs, trials, and failures – of her father.

Witchy Eye was an easy book to write, because in some ways it’s the song of my heart. Getting it published was very challenging. My first agent, after telling me he thought the book had legs, dumped me because he said he didn’t have the time to work on Witchy Eye. Another agent withdrew her offer of representation when I showed her the manuscript. Finally I took to making friends with editors at literary conferences myself and connecting them with my agent. Five years after I’d written the book, Baen made me very excited by offering to publish it.

I play guitar and write songs. Most of my books, and Witchy Eye is certainly one of them, are full of my own song lyrics. These are not just doggerel poems – off the printed page, they actually have melody and chord structures. In fact, I am in the process of recording Witchy Eye: The Album right now, for release later this year, in my home studio.

I also study languages. I took a count recently, and in my office (the old Covey office) I found learning materials (grammars, dictionaries, textbooks, etc.) for thirty-one languages, from Akkadian to Welsh. This shows in my writing – I love hiding little gems and jokes in

You can find a list of what I’ve written on my site, davidjohnbutler.com, along with Amazon links to all the books.

I’m pretty active on social media. I tweet at @davidjohnbutler and my Facebook account (there are lots of Dave Butlers) is facebook.com/dave.butler.16. I also travel a lot, to teach, to sign at bokstores, and to speak and sell at literary conventions or at comic con-style pop culture events (as I write this, I’m on my way to Planet Comicon in Kansas City), so come connect with me online, and then you’ll know when I’m coming to your town so we can meet in person!

One thought on “Author Spotlight: D.J. Butler and WITCHY EYE”