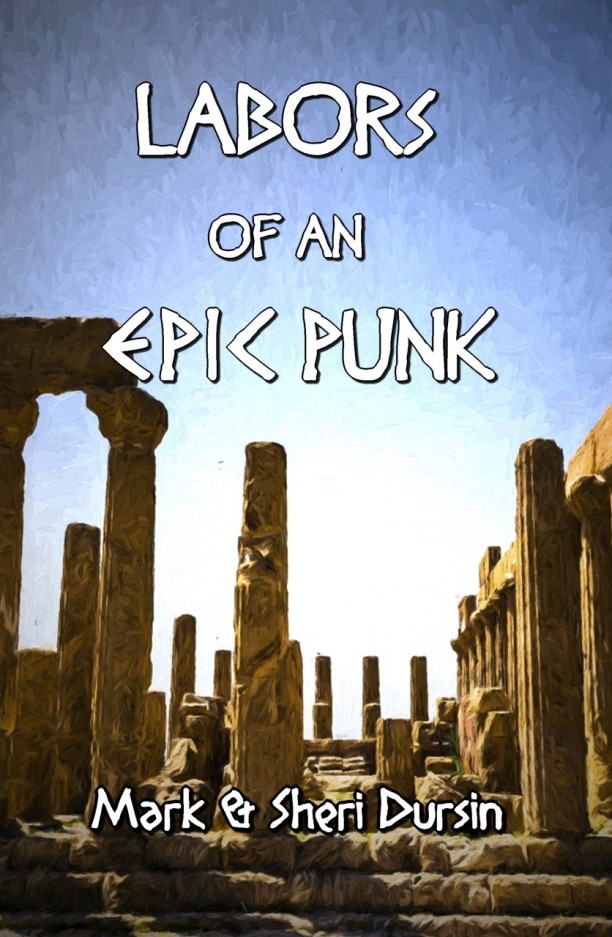 Annie’s Book Stop of Worcester is happy to shine our spotlight on husband-and-wife author team Mark and Sheri Dursin, authors of Labors of an Epic Punk. They’ll be at our 65 James Street store TOMORROW, THIS SATURDAY, Novemver 10, from 4:30 – 6:30 PM, speaking about, reading from, and signing their book.

Both Mark and Sheri have long-standing ties to Worcester; both graduated from College of the Holy Cross in 1992, and their twin sons are currently attending WPI and Clark.

For readers unfamiliar with your work, how would you describe what you write?  What can readers expect from Labors of an Epic Punk?

Clash of the Titans meets The Breakfast Club— that’s how we’ve been describing our book. Labors of an Epic Punk is a retelling of Homer’s epic poem The Odyssey, and it takes place in ancient Greece. But it’s also gloriously anachronistic: the main characters are sixteen-year-olds who attend a private high school.  So, the setting is ancient, but the tone and the vernacular is totally modern. (Nary a “thou” to be found in our book!) Yes, we have an adventurous journey with fantastical creatures. But our characters also do “regular” things, like hanging out at the beach or doing homework in the library. In fact, we always felt the mythological elements of our book could serve as a metaphor for the “regular” teen stuff—for example, we tried to show how, for a teenage boy, asking a girl to dance could be just as scary as facing a Minotaur!

What was the inspiration for Labors of an Epic Punk?

A trip to the restroom—that’s what inspired this epic journey. Many years ago, Sheri was having lunch at a Rainforest Cafe, and on her way to the restroom, she saw this sort of avant-garde statue of Atlas holding up the world. And that got her thinking about all the cool stories from mythology.  Later that night, we started talking about myths and heroes, and we hit upon this idea: let’s take a collection of these ancient Greek heroes—Jason, Theseus, Heracles—and imagine what they were like as teens in high school.

We started throwing out other names of characters that could go to our ancient high school, and we soon started talking about the character Telemachus, the son of Odysseus.  More than anyone else, this Telemachus guy sparked our imagination, because he had this rich but unexplored backstory: his dad left for the Trojan War when he was only an infant and never returned for nineteen years.  Good start for a “brooding YA hero”! So, eventually, we decided to ditch the whole “mythology high” gimmick and focus just on Telemachus, whom we nicknamed “Mac.”

What character did you love the most while writing? And why?

Our favorite is probably Homer, who is Mac’s sidekick and best friend. The real Homer is the author of The Iliad and The Odyssey (the inspiration for our book), so we thought it would be fun to have Homer as a character. Only our Homer is a gay, disabled teenager who has an obsession with gods and heroes. He was just a fun character to write, because he often comes off as this easily exasperated know-it-all, but that’s all bravado to mask his insecurities.  Ultimately. Homer becoming comfortable with himself and learning how to make friends is just as important to the story as Mac’s journey.

Well, our book takes place in ancient Greece, so you won’t exactly find any familiar New England haunts in there. However, we both grew up in New England, and since neither one of us has ever been to ancient Greece (or even the modern Greece, for that matter), we ended up sort of taking what we know and applying it to this mythological setting. Several scenes, for example, take place on a beach, so we just took our favorite Cape Cod beaches and transported them 3,000 years into the past. The school our characters attend could be any prestigious New England prep school.  And when we were nearing the end of the writing process, we created a writer’s retreat for ourselves at a bed and breakfast in Rhode Island. So, even though our book has absolutely nothing to do with New England, you can definitely hear some New England whispers in there, just because that’s part of who we are.

What is your favorite part of being a writer?  Of the whole writing and publishing process? What do you think has been your greatest lesson in the journey thus far?

This. Talking about your finished book—doing promotions like this, sharing our ideas with people we never would have met otherwise—Is a lot more enjoyable than actually writing the darn thing. That’s the old expression, right? “I don’t like writing, but I like having written.”  Writing is very challenging, and we suspect writing as a team—as we did—is even more challenging because there is so much negotiation involved. But having this finished project—something we can hold in our hand—is so gratifying.

Try everything.  As you write, don’t be afraid to explore any and all ideas, even if they seem a little wonky at first. Here’s an example… we had finished our manuscript, and then we had this crazy thought: what if we made Homer the narrator?  In other words, we thought we would change everything from third-person narration to first-person. So, we started re-writing the thing—and realized it wasn’t going to work, mostly because we had to invent these cumbersome reasons why Homer could narrate events that he didn’t witness or experience.  But we had re-written twelve chapters, and some of it was pretty good. And we had really come to love Homer as a character.

So we compromised: we took the best first-person stuff and worked it into the book as Homer’s “scrolls”—first-person letters Homer writes to a friend at another school. We decided to insert these “scrolls” at certain points in the novel. And this was really a game-changer, because these scrolls not only allow us to hear Homer’s voice but they also offer some commentary on the action of the novel.

None of that would have happened if we didn’t try this seemingly unwise re-writing. So, again: try everything. Go down rabbit holes.  And don’t throw anything out. Even if a lot of what you write ends up being unusable, you may have a scrap that could lead to something transformative.

People can find our novel at Amazon.com and Barnesandnoble.com, or they can order a copy at their favorite independent bookstore.

You can go to our website, epicpunk.com. We also did a blog tour this summer, so Google us if you want to read our witticisms.  (In terms of non-creepy stalkers… because this is our first novel, even somewhat-creepy stalkers would not be turned away!)

Thank you so much, Mark and Sheri, for the great interview! We’re looking forward to hosting you, and finding out more about Mac’s and Homer’s adventures in Tales of an Epic Punk, THIS SATURDAY at our 65 James Street bookstore from 4:30-6:30.