Happy Holiday Shopping Guide! Annie’s Book Stop of Worcester, the “bigger on the inside” bookstore at 65 James Street, is happy to present our 2018 recommendations of gifts for the winter holidays.

Welcome to the world of boxed sets of books for adults! We have many great ones available, many of them in the Speculative Fiction category.

The first one is a post-apocalyptic best-selling, Hugo-winning set called The Broken Earth Trilogy by M.K. Jemison. From the “post-apocalyptic” note, you can tell it takes place in a world that has been nearly destroyed. And it is on the brink of being completely destroyed. There are several heroes who acquire powers, and the story is basically about the search for a missing daughter, an evil destroyer, and the end of the world – for the last time. The books in this series are: The Fifth Season, The Obelisk Gate and The Stone Sky.

The next book is a fantasy titled 1Q84, by Haruki Murakami. It is considered a love story, a mystery, a fantasy, a novel of self-discovery and a dystopia, about a teenage girl who enters a “parallel existence” in Tokyo. The “Q” in the title is for ‘question mark.’ a world that bears a question. 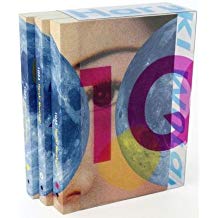 John Scalzi is a Science Fiction author who has written six novels in a series called, the Old Man’s War Series. The boxed set we have in stock contains the first three novels, Old Man’s War, The Ghost Brigade and The Last Colony. Do you think that you would join the service and fight a bloody war when you were 75 years old? The main character in Old Men’s War does. And wait till you see what happens after that! Three races that humans have clashed with before have allied to halt our expansion into space. And they have really bad plans for humanity. 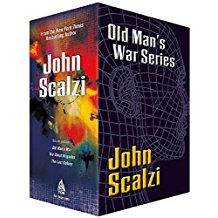 The Expanse Boxed Set: Leviathan Wakes, Caliban’s War and Abaddon’s Gate by James S.A. Corey contains the first three books of what is now a major TV series. This series is about exploring the solar system. People are searching for a missing child. There is an alien protomolecule overrunning a planet, threatening to spread out into the solar system; and the future of humanity is resting on one single ship to prevent an alien invasion that may have already begun…

Another interesting boxed set is the fantasy series, The Shades of Magic by V.E. Schwab. There are four parallel universes, each in which lies the city of London. Our main character happens to be a rare magician who can travel between the four of them. There is treachery afoot, and our hero must find some way to save the four Londons before they reach their breaking point. But he’ll have to stay alive first. The books in this series are: A Darker Shade of Magic, A Gathering of Shadows and A Conjuring of Light.

From all of us at Annie’s Book Stop of Worcester, have a great holiday season, and thank you for making our shelves your destination.