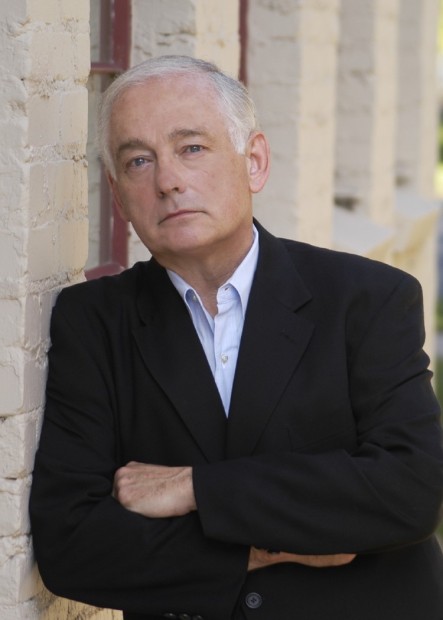 Annie’s Book Stop of Worcester is happy to shine our Friday spotlight on Science Fiction author Robert Buettner.  Robert is a nationally best-selling author of science fiction, and, lately, historical techno-thrillers.  He was a Quill Award nominee for Best New Writer of 2005, and his debut novel, Orphanage, called “a classic of modern military science fiction,” was a Quill nominee for Best SF/Fantasy/Horror novel of 2004. Orphanage and its seven follow-on novels have been compared favorably to the works of Robert Heinlein. My Enemy’s Enemy is his tenth novel, and his debut historical techno-thriller.

We asked him to tell us briefly a little about himself, and he said this:

I was a National Science Foundation Fellow in Paleontology, prospected for minerals in the Sonoran Desert along the Rio Grande and in Alaska, served as a U.S. Army Intelligence Officer, as a director of the Southwestern Legal Foundation, practiced law in Colorado, twelve other states, five foreign countries, and served as General Counsel of a unit of one of the United States’ largest private companies.

Certified as an underwater diver, I was elected as an undergraduate to the academic history honorary society Phi Alpha Theta, and I’ve climbed and hiked the Rockies from Alberta to Colorado. I currently live in Georgia with my family and more bicycles than a grownup needs.

A complete bibliography with links appears on my website, RobertBuettner.com , under “Robert’s Work.” The short stories need to be updated to add several pieces published in the last few months.

All my novels, and my short stories that appear in printed anthologies, are available on Amazon, variously in hardcover, trade paperback, and mass market paperback. Also for Kindle, and as audiobooks from Audible. My titles published by Baen books are also available for various electronic formats via Baen’s website. Two of my novelettes and four short stories are published, for free, exclusively on Baen’s website, at Baen Free Stories.

Several of my novels have been translated by various foreign publishers into Chinese, Czech, Japanese, French, Spanish, Russian. Some of those foreign language titles are available on Amazon and also from brick-and-mortar stores abroad, if that floats your linguistic boat.

I post frequently on my website, RobertBuettner.com. My Wikipedia page usually seems to be accurate and fairly current. Regarding Facebook and Twitter, you can find me there, but I don’t do much with them, because I exhaust my meager stock of wit and profundity writing my books and stories.

For readers unfamiliar with your work, how would you describe what you write?  What can readers expect from My Enemy’s Enemy?

I once answered the question “what do fiction readers want?” as follows: “Fiction readers want to laugh a lot, cry a little, and learn something about life, and about the world,  that they didn’t know. But readers don’t want a novel that turns into The Fourth Grader’s Big Book of Story Problems.”

My Enemy’s Enemy is about the nature of history, World War II and the rise and fall of Nazism, nuclear physics, contemporary terrorism, exotic aircraft and how they fly, and most of all about characters who I hope readers will care about. And I think readers who already know those topics, as well as those who don’t, will find what they want in My Enemy’s Enemy.

I’ll paraphrase what some editors and reviewers have said about my work: Succinct well-written prose. Rapid, clear action. Smart dialogue. Imaginative and surprising, yet credible and suspenseful, plotting. Finely researched and authentic detail. And some thoughtful musings that make you think.

That applies to My Enemy’s Enemy as accurately as to my prior novels. As I heard George R.R. Martin say once, about the difference between Science Fiction and Fantasy, they are “the same house but with different furniture.” Ditto SF and techno thrillers. Successful fiction’s foundation and framework is always characters the reader cares about, what they will do next, and why. 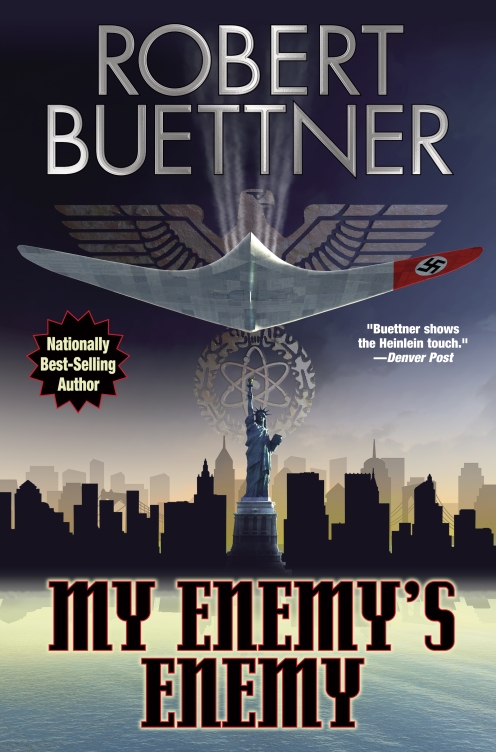 My Enemy’s Enemy was the most challenging book to research that I’ve written. Not just because presenting stuff like how to build an A-bomb, how to track down (or not track down) a contemporary terrorist, the history of the Nazi party and World War II, and how to fly vastly different aircraft types, and present it all readably and accurately within a compelling story was hard.

The biggest problem was having to leave in only the most astounding and fascinating facts and anecdotes, while leaving out the vast remainder. Then there is the challenge of accurately but succinctly portraying historic figures interacting with the story’s characters.

The best details I found, and the most poignant, were the dark jokes and ironic insights of soldiers and civilians on all sides, that kept them more or less sane. I wove in only the ones that advanced the story. Mountains of them I had to leave out.

What was the inspiration for My Enemy’s Enemy? What were the steps you took to bring it from initial inspiration to the finished book?

On the day the first atomic bomb was dropped on Hiroshima my father was aboard a troopship in the Pacific, doubtless bound for the invasion of Japan. Based on the outcomes of American invasions of Japanese held islands up to that time, more – perhaps twice or three times more-American service personnel were likely to have been killed in that single campaign than had been killed during the entire war to that moment. So I likely owe my existence to the decision to deploy nuclear weapons. So do millions of contemporary Japanese, because the invasion would also likely have killed as many as ten to twenty times the total of Japanese civilians and service personnel as the total death toll of the two A-bombs that ended the war without an invasion.

Some may argue with my numbers, but after living this subject for a couple years, I think they’re accurate.

Whatever the numbers, nukes have overhung my world like Damocles’ sword all my life, and I thought a lot about how many nuclear bullets mankind had dodged since it split the atom. And one situation in particular made no sense.

However, as U.S. work began, Manhattan Project physicist Leona Woods said, Germany “led the civilized world of physics in every aspect.”  Also, four years earlier, in 1938, Germany had already annexed Czechoslovakia’s Sudetenland, securing vast uranium reserves, and nuclear fission of uranium was first observed, not by émigrés in America, but by Otto Hahn and Fritz Strassman, in Berlin.

The Third Reich, in its twelve years, built mankind’s first interstate highways; hosted, televised, and won the Olympic games; deployed mankind’s first jet and rocket aircraft, cruise missiles, and smart bombs; and launched ballistic missiles to the edge of space.  The Third Reich also murdered two-thirds of conquered Europe’s “undesirables,” six million of who were Jews, yet managed to hide it.

But history says the Nazis built no atom bomb, because Werner Heisenberg, the physicist they scorned as “The White Jew,” told them it was too hard?

By that I assume you mean other writers who want to be conventionally published, that is to have a real publisher pay you for your novel, and print it, and put it on shelves for sale in real bookstores like Annie’s. What we in mutual critique groups used to call “New York published.”

My advice is hone your craft, by reading about writing, and more by actually writing, and by seeking help with your writing, until you have created a novel so great that agents, and then publishers, couldn’t possibly reject it. Then steel yourself to reinvent yourself and your work and try again, as many times as it takes, when they reject it anyway.

Thanks very much for taking the time out of your busy schedule to answer our questions, Robert!