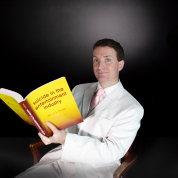 Annie’s Book Stop of Worcester is happy to shine our Friday spotlight on Horror Author Grady Hendrix. Grady, Can you please tell us briefly a little about yourself and your writing?

I’m just a guy in New York who writes horror novels and movies. Some of my other books include Horrorstor, My Best Friend’s Exorcism, and We Sold Our Souls. I also spent way too much time reading horror paperbacks from the Seventies and Eighties and that caused me to write a book called Paperbacks from Hell. The horror movies I’ve written are Mohawk, probably the only War of 1812 horror movie that’ll ever get made, and Satanic Panic, about a pizza delivery girl taking on a Satanic cult.

Where can people find your work? (Besides Annie’s Book Stop of Worcester–though they should totally check here first!)

You can find out way too much about me at http://www.gradyhendrix.com

All my social horribleness is linked at my site.

Also, can I just say, this is a vampire book and there are a lot more ways to become a vampire than I ever realized. If seven children of the same sex are born into a family then the seventh will have a tail and be a vampire, if pregnant women don’t eat enough salt they give birth to vampire. If a cat walks over a corpse, a shadow from a human falls on a corpse, a bird flies over a corpse, a boy jumps over a corpse — vampire. In Greece, children born between Christmas and Epiphany automatically become vampires, children born on Christmas Day become vampires, werewolves become vampires after death, children born with teeth are obviously vampires, suicides, drowning victims, the first person to die of an epidemic, Christians who convert to Islam, priests who say mass in state of mortal sin, godparents who stumble reading the Lord’s Prayer at baptism, corpses left unattended, anyone who dies alone, babies weaned and suckled too much — all of them become vampires. To be honest, I’m surprised pretty much everyone in the world isn’t a vampire. 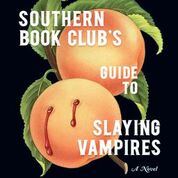 What was the inspiration for The Southern Book Club’s Guide to Slaying Vampires ? What were the steps you took to bring it from initial inspiration to the finished book?

A while back I wrote a book called My Best Friend’s Exorcism about two teenage girls living in Charleston in 1988 at the height of the Satanic Panic. They become convinced that one of them is possessed by Satan and poor decision-making ensues. A lot of people read it and said, “The parents in that book are horrible.” And they’re right, because I wrote that novel from a teenage point of view, and when you’re a teenager your parents are totally horrible. But there’s another version of that story, told from the parents’ point of view, about how helpless you feel when your kid is in danger. I wanted to write a story about those parents, and so The Southern Book Club’s Guide to Slaying Vampires was born. It’s not a sequel to My Best Friend’s Exorcism but it takes place in the same neighborhood, a few years later, because that’s where I grew up and I apparently lack the imagination to write about anywhere else.

What was the biggest challenge in writing and putting out The Southern Book Club’s Guide to Slaying Vampires? How did you overcome that challenge?

I’m a deeply inefficient writer, so for every book I write, there are usually two if not three completely finished drafts that are so radically different they might as well be different books. The Southern Book Club’s Guide to Slaying Vampires is a book I wanted to write for a long time, and one I worried about getting right since so much of it is based on where I grew up and people I knew. That means there were even more drafts that are hidden in a box in the bottom of a closet. It’s tough to finish what you think is a perfectly okay book and then stick it someplace no one will ever see it, but you have to remind yourself that if you got into this business to write “perfectly okay” books then you should have kept your day job. People may not like the final product, but it’s not because I didn’t sweat a few gallons of blood over it. 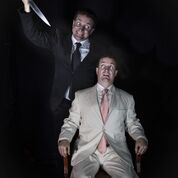 I write in an office around the corner from my home, wedged in between a place that gives driving lessons and a medical billing company. It’s full of boxes of paperback horror novels from the Seventies and Eighties, a napping couch covered in boxes of horror paperbacks from the Seventies and Eighties, and right now a desk covered in books about vampires. So many books about vampires.

Thanks for taking the time out of your busy day to answer our questions, Grady!