The crisp fall air…. the falling leaves… both are indicators of our favourite time of year.  And we continue to get old favourites and new releases for the young and the young at heart.

Back in stock, just in time for the spookiest season of the calendar year, is THE HALLOWEEN TREE, Ray Bradbury’s classic short novel for middle grades.  Join Carapace Clavicle Moundshroud as he whisks Tom Skelton and his group of friends off on a tour of the ancient holidays of ghosts, goblins, and harvest traditions. 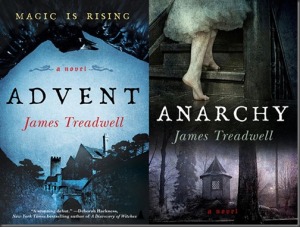 Newly released is ANARCHY by James Treadwell, the sequel to last year’s intriguing debut novel ADVENT.  Aimed at teens aged sixteen and up, this book continues the tale of Gavin Stokes and his growing awareness that magic is present in the everyday world… a dark, frightening magic that imbues the most mundane of objects and circumstances.  Tales of other characters and their fear-laden quests interwine with Gavin’s and make this an un-put-down-able read.

For those who like their reading set a little closer to home, we just got in UNITED WE SPY, the final installment in Ally Carter’s “Gallagher Girls” series.

The group of spy teens introduced in I’D TELL YOU I LOVE YOU BUT THEN I’D HAVE TO KILL YOU races against time to stop the master plan set in motion by The Circle of Cavan.

Other titles in the series include CROSS MY HEART AND HOPE TO SPY, DON’T JUDGE A GIRL BY HER COVER, ONLY THE GOOD SPY YOUNG, and OUT OF SIGHT, OUT OF TIME.

Finally, we have restocked on one of our favourite gift books of all time.

Watty Piper’s story of THE LITTLE ENGINE THAT COULD continues to be beloved by generation after generation of children.

This hardcover reproduction of the original Platt & Munk edition is sturdy and colourful, without losing any of the story’s charm or text.

Get your copy today and start a household tradition!

—Patty and the staff at ABSW