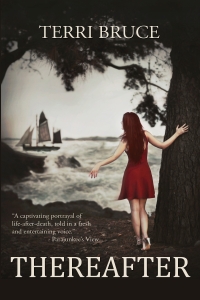 Annie’s Book Stop of Worcester is happy to have Terri Bruce on our Author Spotlight blog. Terri Bruce has been making up adventure stories for as long as she can remember and won her first writing award when she was twelve. Like Anne Shirley, she prefers to make people cry rather than laugh, but is happy if she can do either. She produces fantasy and adventure stories from a haunted house in New England where she lives with her husband and three cats. Hereafter (Afterlife #1) is the first book in her Afterlife Series, and we’re celebrating the release of Thereafter (Afterlife #2), which came out May, 1, 2014. Terri is also the head of the New England Broads chapter of Broad Universe, and a wonderful person with whom to hang out.

For readers unfamiliar with your work, how would you describe what you write? What can readers expect from Hereafter (Afterlife #1)?

I describe my work as “fantasy and science fiction with a literary bent,” though my work is a really a blend of science fiction/fantasy, women’s fiction, and literary fiction, in the vein of The Lovely Bones, Cloud of Sparrows, Peony in Love, The Sparrow, Neverwhere, and The Time Traveler’s Wife.

My book, Hereafter (Afterlife #1) is the story of a woman named Irene Dunphy who didn’t plan on dying any time soon, but that’s exactly what happens when she makes the mistake of getting behind the wheel after a night bar-hopping with friends. She finds herself stranded on Earth as a ghost, where the food has no taste, the alcohol doesn’t get you drunk, and the sex…well, let’s just say “don’t bother.” To make matters worse, the only person who can see her—courtesy of a book he found in his school library—is a fourteen-year-old boy genius obsessed with the afterlife.
Unfortunately, what waits in the Great Beyond isn’t much better. Stuck between the boring life of a ghost in this world and the terrifying prospect of three-headed hell hounds, final judgment, and eternal torment in the next, Irene sets out to find a third option—preferably one that involves not being dead anymore.

The sequel to Hereafter, titled Thereafter, came out May 1st, and I’m currently working on finishing up the first draft of the third book in the series (the series is tentatively planned to be six books total). In addition, I’m working on a science fiction story that’s a kind of cross between Firefly and Battlestar Galatica (but not really)—sort of cowboys in space searching for a new home after theirs is destroyed, and I’m hoping to have some short stories published this year. So, basically, lots of irons in the fire.

What kind of research went into writing this book? What is your

favorite research story? What cool facts and findings didn’t make it into the book, but you loved discovering?

I love mythology, especially the origins of myths. Throughout history, cultures borrowed from each other, building on each other’s mythology and stories. If you go back far enough, you can find the common origins of those stories—that’s the stuff I find really fascinating. When I came up with the idea for Hereafter, I thought about all the stories/myths related to what happens to us when we die that are out there, and how different they all are and I wondered what the common, underlying story(ies) were—what were the common, unifying threads? And to take it one step further, if all the stories were true, how could they be reconciled? That was the challenge I set up for myself with this series: to create a cohesive vision of the afterlife that included ALL of the myths from every culture and religion on Earth from throughout all of history. So the research has been quite extensive and incredibly interesting; I have a giant three-ring binder full of my research and I’ve worked as much of it as I can into the series.

I love horseback riding, quilting, crocheting, reading, hiking, cooking, baking…LOL! Too many hobbies, not enough time! It’s unfortunate that I have to work full-time—it makes finding the time for hobbies very hard. I’m still fairly new to writing as a profession, rather than a hobby, so I haven’t quite found that work-life balance around working, writing (which is now basically a second full-time job), and hobbies/fun. I’m trying to keep writing to M-F, like a job, and keep my weekends free for hobbies, but it’s all a work in progress.

That I’m paralyzingly shy. Most people think I’m an extrovert—I’m not. I’m a very, very high introvert, and I’m very shy/nervous when I meet someone for the first time. However, I do love meeting new people, and I love it when people message me on Facebook or Twitter (I do respond!). I go to quite a few conventions around New England (Arisia, Boskone, Pi-Con, and Readercon), so please do say hi to me if you see me there.

Dorothy Parker famously said, “I hate writing. I love having written,” and that’s pretty much how I feel about the writing process. Every stage is the hardest/most challenging: starting a story, drafting a story, editing a story, book production, marketing, etc. Being a writer is a lot of work and none of it comes easy, at least for me. But, like pretty much every writer out there, I feel compelled to write—I can’t not write—and so I push through each stage, even when it’s exhausting or aggravating, and in the end I feel great when a book is finally done and I hold it in my hands. Then it’s all worth it.

The number one thing I recommend for all authors is a critique group. I started out as a member of the Portsmouth Public Library’s writers’ group and I learned so much from them. The New Hampshire Writers’ Project and Agent Query Connect are two great organizations/groups for aspiring writers who are in the querying/submission process of trying to get published or who are thinking about self-publishing. Broad Universe, an organization for women writers of speculative fiction, has been especially great as well in providing advice, guidance, and support to me during all stages of publication.

I love to connect with readers! You can find me on Facebook and Twitter (links below) and I blog at www.terribruce.net. You can also find out my upcoming appearances via the New England Broad Universe Meetup at http://www.meetup.com/Broad-Universe-New-England-Author-Events.
Email: tbruce@terribruce.net
Website/Blog: www.terribruce.net
Goodreads: www.goodreads.com/TerriBruce
Facebook: http://www.facebook.com/authorterribruce
Twitter: @_TerriBruce

Thank you so much, again, for joining us, Terri! Congratulations and good luck with the release of Hereafter!