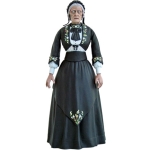 * Bring home some creepy creatures appropriate to the season.  We have action figures of some of DOCTOR WHO’s haunting and otherworldly antagonists… the Gelth Zombie… the Smiler… Francesco the Vampire… Dalek Sec in his hybridized humanoid form… and many more!

* The newest monthly issue of DOCTOR WHO MAGAZINE has arrived, with the scary cover caption “HEAVEN OR HELL?” Articles in DWM #479 include a preview of the Series 8 finale and the challenges faced by Peter Capaldi as he wraps up his first season as The Twelfth Doctor, interviews with actors Paul McGann [the Eighth Doctor] and Samuel Anderson [Danny Pink], writer Peter Harness and producer Derrick Sherwin, and more!

Come and scare yourself with toys, audios, magazines and more at Annie’s Book Stop of Worcester!