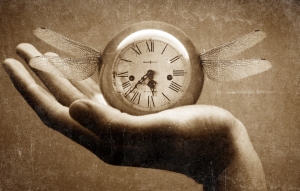 Deep in the Historical Romance bookshelves at Annie’s Book Stop of Worcester, you will find a rare breed of books that will withstand the test of time – that’s right – time. Time travel, that is. There are many authors that choose to have some of their main characters be caught up in some sort of a time travel incident. They may be thrust into this situation either intentionally or non-intentionally, but the results are always very explosive!

Lynn Kurland, for example, has written many time travel romances in which their heroes and heroines are mainly from two different eras – one from the present day, and the other from the Scottish Highlands, in Medieval times. She writes about two different but intertwined families, the DePiagets and the MacLeods , the latter of whom are Highlanders who have taken up residence in present-day Scotland. She also introduces some paranormal elements into her books, including some relative ghosts (literally).
The main thing is that the rules of all Historical Romances still hold true. The females are all independent and strong willed, and the men are Alpha males, who love their women for their wills, but still need to protect them from the dangers of the times. Some of her time travel novels include:

Another author of time travel romances is Janet Chapman. Her books take place in Maine, in the present day, but many of her characters are from another century, or are actually mythical characters. She has several series, one being the Highlander series. (Sound a bit familiar? Many of the time travel romances involve Highlanders..) In this series, Graylen MacKeage from Medieval Scotland is caught in a Wizard’s spell, and cast forth into present day Maine, in order for the Wizard to make sure that his successor as Wizard is conceived. Things go awry when several other warriors from the MacKeage clan, as well as warriors from their warring clan, the MacBains are also sent with him unintentionally. Included in the Highlander series are:

Another of Janet Chapman’s time travel romance series is the Spellbound Falls series, which involves the mythical characters, as well as some of the ancient warriors. This also takes place in Maine, and includes the MacKeages, MacBains, and the Oceanus family. The Island of Atlantis plays a large part in the story, but I won’t give things away. It’s a great series, well worth reading. The female characters are also strong willed, and the males are, of course, as alpha as they come. They all do come together from two different worlds, however, the old and the new, which is what makes the time travel romances so exciting. The books in the Spellbound Falls series are:

Janet Chapman also has another time travel romance series called the Moonlight Bay series, with three books in it. All three series are somehow interconnected.

There are a plethora of other authors choosing Scotland as the location of their time travel romance novels. They include Cassidy Cayman, with her Lost Highlander series, taking place in 18th century Scotland. The titles are:

Susanna Kearsley also writes time travel romances in Scotland, some of her titles being:

The Rose Garden
The Firebird
The Winter Sea
Season of Storms

The Rose Garden and The Winter Sea are both considered to be in the top 10 Best Time Travel Romances according to Bestreads.com.

Bethany Claire uses the Scotland of 400 years ago as the backdrop for her Morna’s Legacy series. The books in that series are:

Did I forget to mention that many of the time travel romances take place in Scotland? Karen Marie Moning’s Highlander series also has something to do with Scotsmen…

Sky Purington has written a number of time travel romances with Scottish characters, and in Scotland, but where hers differ is that her characters come from Viking ancestry. One of the sub series in her MacLomain series of books are actually about Vikings, but the rest are about Scotland.

He also has other novels related to the MacLomain series, but they aren’t considered time travel romances.

I’d like to close this Scottish time travel romance blog with the most famous of all of the time travel romance writers -Diana Gabaldon. She created the Outlander series, which is now a popular TV series as well as being a best selling book series. It is about a former combat nurse in 1945 who walks through an ancient circle in Great Britain, and becomes an “Outlander” in a Scotland torn by war and raiding border clans in the year 1743. The books in this series include:

There are many other time travel romance authors who write about travel to different time periods and places, but that’s a blog for a different time.