Annie’s Book Stop of Worcester is happy to shine our spotlight on Larissa Glasser! Larissa is one of the staff’s friends for years through the horror community, so we’re thrilled to work with her on an event for Pride Month!  She will be part of our panel, Creating in the Trans Community, co-hosted with Rainbow Readers of Massachusetts, which is happening  NEXT SATURDAY, June 2 from 1:00 – 3:00 PM, at our 65 James Street Worcester store.

Larissa Glasser is a librarian, genre writer, and trans lesbian from Boston. Her short fiction has appeared in Wicked Haunted (New England Horror Writers), Tragedy Queens: stories inspired by Lana Del Rey and Sylvia Plath (Clash Books), Procyon Science Fiction Anthology 2016 (Tayen Lane Publishing), and The Healing Monsters Volume One (Despumation Press). In 2017, Larissa co-edited Resilience: a collection of stories by trans writers (Heartspark Press). Her debut novella F4 is available from Eraserhead Press. Larissa is a Member at Large of Broad Universe, which advocates for female-identified writers of genre fiction. She is on Twitter @larissaeglasser and blogs at https://larissaglasser.com/.

Thank you so much for joining us, Larissa! Can you please tell us briefly a little about yourself and your writing? How would you like us to introduce you?

I’m a librarian and not-quite-reformed metalhead who writes genre fiction with a focus on transgender living. My upbringing on 1980s horror, science fiction, fantasy, and cheesy action movies informs my writing just as much as my gradual coming to terms with myself as a lesbian trans woman. Heavy metal ties into that as well. I’m hardly unique in this regard, but I think this perfect storm of seemingly disparate elements has given me just enough strange conviction to say some things that are unique to my experience, and hopefully of interest to readers. Me, myself? I just hope to improve my writing skills exponentially during this process of further discovering myself, while trying to advocate for the safety, dignity, and rights for all trans women.

For readers unfamiliar with your work, how would you describe what you write?  What can readers expect from your most recent work?

I write genre literature from a trans feminist lesbian perspective. I relate to horror literature in particular because of my own trauma and ongoing experience with the repercussions of that trauma. I wrote my debut novella F4 (Eraserhead Press) partly to sort out my own personal desire to be welcomed by the trans community and all the while knowing I can just as likely be excluded or shunned from it. That deep pain needs to be addressed through emotion in storytelling and character. It’s my therapy.

Read other authors and try to make a lot of writer friends by networking, going to cons, setting up readings. I’m very introverted by when writers share a common interest, it’s funny how quickly and easily good things fall into place.

My short story “The Mouse” which appeared in the Wicked Haunted anthology (published by New England Horror Writers) will also appear in Transcendent 3, The Year’s Best Transgender Speculative Fiction (Lethe Press) later in 2018.

Clash Books just published Tragedy Queens: Stories Inspired by Lana Del Rey & Sylvia Plath. I’m honoured to have been selected for that; my is story “Rituals of Gorgons.” It’s actually the first story that I pantsed (rather than obsessively outlined) in a very long time, and it turned out to be my favorite thing I’ve written so far. I’m actually planning on expanding the idea into a novella, a parallel narrative about celebrity, transphobia in the media, and fairy mounds.

I’m also working on a novel about trans teens facing down a religious cult in their town. It’s going to be like River’s Edge meets Stranger Things, but it’s definitely told from a trans feminist perspective. It’s also a meditation on time and aging, hallucinogenic drugs, and heavy metal. 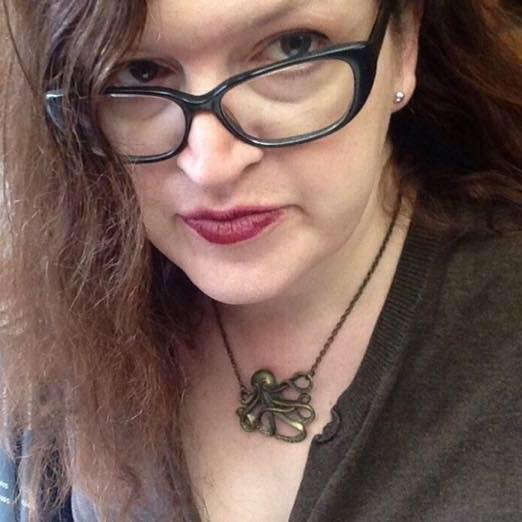 Along with studying history and professional development, I love going to heavy metal shows and hanging out with my Brooklyn crew. I always make time for Brooklyn.

Consistency. I work a day job as a librarian in academia. While the job is not in itself exhausting, I try to engage myself with professional development and networking as much as I can during my free time. Balancing that with my writing is a huge challenge, because I’m not a good morning person at all. But scheduling out blocks of time, usually just an hour where I write, is the most I can really do to achieve that balance consistently. One thing I do is set a chapter goal for the end of each week, on a dry-erase calendar I hung on the wall. Also, don’t laugh, I have an analog way of keeping myself to an hour: I use a kitchen timer.

What is the greatest lesson you’ve learned, thus far, in your writing career?

Starting is easy. Finishing is everything.

My amazon author page has all of my projects listed. https://www.amazon.com/Larissa-Glasser/e/B077VRYC8L/

I’m on Facebook and Instagram as well, but I usually don’t accept friend requests unless I’ve met someone in person, or unless they’re one of my trans sisters.

Thank you so much for the interview, Larissa!  We look forward to having you in our store for Creating in the Trans Community on Saturday, June 2, from 1:00 – 3:00 PM!